***MASCA Hall of Fame Breeder***
Our Females are evaluated STRICTLY at 8 weeks old then again at 2 years old to be sure they should be in our breeding program. We are looking for great structure that can win in the show ring, personality/temperament to do performance events and hold up for many years in athletic events as well as clear health testing.  We only keep balanced, outgoing personalities in our program for the best chances of that in their puppies. Most of our pet puppies are show/breed quality but we can't and won't keep them all.  We will only keep the highest quality pups
back to breed better and better Mini Americans for our clients to enjoy in the future.
Be sure to consider 74 Ranch for your next 'Best Friend'!!!

Echo and Cooper's sire, URO1, CH Wigglebutt Light Up My Life RL1 Award of Excellence, RL2, mHIC, DD-A, CD-M, CD-IM, SCT-N
***Echo- #10 MASCA CONFORMATION 2011, #8 in 2012; #2 Top MASCA HERDING Dog 2016 and 2017; Most Versatile Aussie 2nd place 2016 and 2017; Extreme Aussie Games #3 2016; #4 2017*** Echo is sired by Wigglebutt Light Up My Life (Lucas) from Wigglebutt Aussies of Indiana and out of our Hall of Fame X Dam  IABCA CH Heartland's Whispering Brooke. We loved the litter out of Brooke and Lucas so we decided to keep 2 of them in our breeding program. Echo lives with us at 74 Ranch and her full brother Cooper lives in Colorado- finally we produced some to keep! Echo truly is the full package - she structure tested excellent and is an awesome dog with SUPER MOVEMENT, athletic abilities, great personality and gorgeous looks! She has a super shoulder angle and front end, great strong legs and hocks, nice head, well balanced! She truly is the joy of my life, we work super well together and she will do anything to please me!  She has at least 23 titles.

She loves agility and frisbee and is a very focused girl! We have kept several of her babies in our program/partner homes to see how they grow up. At her first NADAC agility trial she got 3 qualifying scores out of 4 runs! She got her Open NADAC agility in 3 days/6 runs!

Oct 2016: Echo got High In Trial Level 2 Herding on Ducks under Judge Anita Ramsey!  That was fun!  She also was a major part of 74 Ranch winning Breeder's Showcase, Generations and Brace at the year-end award.  She also was 2nd in the WOWMASC Top Performance dog of the year.  She went on to be the #2 MASCA Herding Dog in 2016!!!

Nationals 2017: Echo got 5 High In Trials and 2nd pace MVA (Most Versatile Aussie) and got 4th in EAG (Extreme Aussie Games). She got HIT (High in Trial) in Acrobatics, Agility-Jumpers, Agility-Tunnelers, Farm & Ranch and Rally-Obedience.  She also won Brace with her granddaughter, Candor.

In mid September 2017 Echo finished her level 3 sheep herding title and level 1 Farm and Ranch title.  She got 1 leg of her level 3 Duck title, but missed the A course by 1 point... This did qualify her, however, for the V-4+ Versatility Award (it's the highest you can get in MASCA and she's the first/only one to get it)!

Echo was a great producer for us: Savvy, champion also got her CGC, novice disc dog title and advanced rally title; Chatter - champion and several herding titles; Sway - champion and novice rally title along with some gorgeous pups that we have placed in pet and/or co-own/partner homes to watch in the future. Her grandbabies are proving to be as good or better than her babies!!!

Echo got her MASCA Hall of Fame Dam January 2020. We lost her in Sept 2018, she will be forever missed by us here at 74 Ranch!
Delyla has finished out great, she has had 2 litters for us so she is now retired.   She's got a super cute, bold, obedient personality! We have kept 1 male out of her for our future breeding program.
AKC registered.
FOLLOW US ON

Candor is a beautiful girl we just couldn't give up even before evaluations. She is very much like her grandma Echo! She has been in a few shows already and done great - Best in Groups, Best of Breed puppy and such. Judge comments include: "Promising Girl, very nice young puppy, very balanced front and back, strong front and back, firm level topline, good reach and drive, well developed good depth of chest."

At her first MASCA Nationals (2016) she got Best Brace Team with her grandma, Second in Female Head Type and 2 Best of Winners (1 Pre-Show under Judge Gail Stiefferman and the Nationals Specialty under Judge Gayle Garvin which gives her 2 majors towards her championship. She won over 12 and 17 other dogs/girls). She also got her Rally Novice Title - at 8 months old!  She got her championship a few months later with a Best of Opposite under Judge Nina Marie Sherrer. Also getting best movement and 2nd in head type that weekend.

Oct 2016: CH 74 Ranch Tell N It Like It Is got Best of Breed in one show under Judge Jean Pero and Best of Opposite in the other show under Judge Robin Hug.  She also was a major factor in the ranch winning Breeder's Showcase, Generations and Brace under specialty Judge Sharon Elkins.  She got a WOWDOG award and a Hotdawg award!  She was 2nd in the WOWMASC Top Conformation dog for the year.

Dec 2016: In Colorado at an ICE show Candor got Best of Breed, Group One and Reserve Best in Show under Judge Randall Sheets. She is now 1/2 way to her MASCA Grand Championship. Judge comments include: "excellent overall impression", "excellent reach and drive", "wonderful coat" and "beautiful expression in eyes".

MASCA Nationals 2017: Candor passed her herding instinct test, got High In Level Rally Obedience as well as her Open title, Won Movement and won Brace with her grandma, Echo.

Candor went on to achieve the #1 MASCA Female 2017. She lives with and is loved by us here at the ranch in Wyoming. After achieving all she could as a Miniature Australian Shepherd we decided to take her to AKC as a Miniature American Shepherd.  Her first show out she got 3 RWB with NO hair... Then she passed her CGC test.  Her second show (Idaho) she got Winner's Bitch all 4 days.  Her third show (Casper WY) she got Best of Winner's in one show and Winner's Bitch in another.  She now has her AKC championship and is on her way to her Grand.

Candor's Personality test at 8 weeks old
MASCA HALL OF FAME X DAM Brooke
Brooke got her Int'l and National Championship and a major in MASCA before we spayed her.  She is the foundation of our program producing GR CH 74 Ranch Wigglebutt Echo in Time, CH 74 Ranch Black Label and CH 74 Ranch Everything's Just Ducky (in order below).  She's the first female we kept any pups from for our future program.  The 3 offspring below helped Brooke get her Hall of Fame (we had 6 titles and only needed 5)!!! Thanks to Kristy Allison and Cindy Germain for helping out with Cooper and Ducky! Her daughter, Echo also went on to become a Hall of Fame Dam. 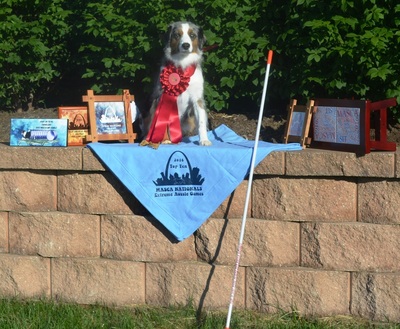 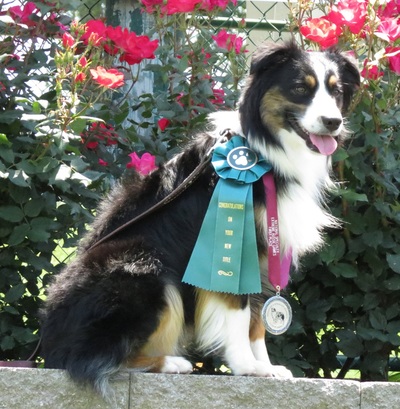 Chatter is an awesome female, sired by Yvonne Daughtry's (A King's Castle Aussies) Doc. She is so much like her mom but has a great amount of her dad's personality mixed in, we love it! Chatter has won several Female Head Type, Brace with her mom, Obedience trials and several WOWMASC Hotdawg (and Wowdog) award. She is a ICE and MASCA Champion. She loves the show ring and has a super personality! A few judge comments included: well shaped, feminine head; well placed ears, good depth of chest, well angulated, solid topline, balanced back quarters with front, excellent reach and drive, outgoing and friendly.

In her first herding debut she Q'd in all 3 runs.  She got a JHD with AHBA and her first leg in MASCA Level 1 Herding.

Oct 2016: CH 74 Ranch Talk N Up A Storm got a qualifying score in herding level 2, Brood Bitch, Female Head Type and was a help in getting Generations and Breeder's Showcase. She ended up #3 MASCA Herding Dog 2016!

Chatter produced Grand Champion Top 10 MAJC 74 Ranch Union Jack along with his sister who is on her way to her championship and several wonderful agility prospects. She received the FIRST and only V-3+ award with MASCA!  Union Jack's half brother (who is double bred Chatter) MAJC Who's Ur Buddy got his AKC Championship quickly in 2022.  (black tri pictured above in the slideshow)

Chatter personality test at 8 weeks old
MASCA CH EnV
EnV is a MASCA Champion and has her KCUSA Championship and has several titles in performance events. We kept a few of her pups back for our program and look forward to how they will turn out for our co-own homes.Added to EnV's list of winnings is: Brace with her mom several times, several High In Levels and High In Trials, MASCA Versatility #2 Award, Hotdog awards, Wowdawg awards, CGC and this list will continue to grow.

She has a super high drive, loves the frisbee and agility yet can calm right down and do obedience and rally.

What a great producer EnV was especially when bred to Jack - she produced Jack Jr who has really produced well and Champion Chase (74 Ranch Casanova at Quail Ridge) who has won several Best Of Breeds (including ASA 2019 Nationals) lives in Nevada.  She also produced our Grand Champion, Top 10 Sling Shot (GR CH 74 Ranch Shoot N For the Stars)
ELLA - ASA & MASCA Champion, #2 ASA 2018 (we have 1 son and 1 daughter)
***ELLA - 2018 #2 ASA Conformation Dog***   Ella is our first Union Jack puppy held back. She has a SUPER personality.  Judge's comments as a pup were: "excellent chest, front and rear quarters, topline, tail set, head, coat, nice movement and bone."  At 18 months old judge comments were: "good forechest, good shoulder layback, good rear angles, level topline, great expression and temperament, well balanced."  She got a Best In Show that weekend along with 3 Best of Breed Bred By. We look forward to showing her more as she matures.  She lives with Scott and Karla in Wyoming.
MASCA #2 in 2012; #10 in 2016
LUCY - Reference Dam
DAM of #1 Miniature American Shepherd Preferred Agility, 2019 & 2020
(Loyal to Kyle sired by GR CH 74 Ranch ShootN For the Stars)
***Lucy- #2 MASCA Mini Aussie 2012, #10 in 2016*** Lucy is a beautiful female sired by Champion Bluegrass Encore of Heartland out of Grand Champion Sagonige's Usti. Her full sibling was #1 in the top 10 2015 and 2016 - so the structure and movement is in her lines.  She passed her herding instinct test, at her first Nationals in 2012 and got High in Trial Rally with a perfect score.  She became a MASCA Champion at 10 months and grand champion before her 2 year birthday! At the WOWMASC Specialty August 2012, she got all 3 show's BOB's, Won Intro Obedience with High in Level and Trial. She also won movement there. A few weeks later she got 4 Best in Shows at the ARBA show in Longmont achieving her Grand Championship. Her pedigree is full of champions! Thanks Rachel Hyer for showing Lucy to her Grand! Lucy has a confident personality and knows no strangers.
Besides producing great conformation dogs Lucy (with Sling Shot) has produced the #1 Miniature American Shepherd (preferred) Agility Dog 2019 - PACH9 Loyal To Kyle RN MXP17 MXPS2 MJP17 MJPG2 PAX6 OFP

LADY - Reference Dam (We have 1 daughter and 2 sons)
Sired by GR CH 74 Ranch Shoot N For the Stars CGC, RO-N, I-M, V-2 and out of our own HOF Top 10, Multi Champion, Gr CH 74 Ranch Wigglebutt Echo In Time CGC, SCT-I, A-N, ND-M, RO-A, AS-N, NTD, DIS-I, SDA-I, OAC, HD-L3S, HD-L2D, V-4+.  She's little, cute, fun, moves like a dream and has a great personality.  She's got super good focus, great structure and is very intelligent!  She is clear on all testing. AKC registration pending.
ROOK - Reference Dam (we have 2 daughters)
Rook is quite the girl - she LOVES life!  She is started on her championship getting Best of Breed in Nebraska at the IABCA show June 2018. She is fun to be around, super happy and absolutely beautiful!