Club and Venue Differences and Abbreviations!

﻿AVAILABLE PUPPIES, click here!﻿
What are the differences in Championships with different clubs/venues?

IABCA, ICE: when you see "Int'l or Nat'l Champion" that means the dog could have gotten a championship in just 3 or 4 shows and never has to beat another dog to get it. The dog is judged against the breed standard not the other dogs.

An ASDR champion is earned by accumulating points and can be achieved by being a participant (although that would be a lot of shows). They earn points up to 3rd place in just their age class then go on and get more points as they get Winners, Best of Winners, Best of Opposite and/or Best Of Breed.  If you win in the ring you will accumulate those points faster though. They have different levels of champions, so the higher the level the more points you would have to accumulate.

A MASCA or ASA Championship is just like ASCA or AKC shows, you have to get 15 points with a major as part of that (meaning you have to get Best of Winners, Best of Opposite or Best of Breed for that major). You can achieve points for Winner's but you will not get a major and you can only count the non-champion dogs in the show (not including yourself).  For Grand Championship  you need 50 points (starting over after that 15 pts for championship) with 3 Majors which ONLY include Best Of Opposite or Best of Breed.  We achieved Hall of Fame Breeder status in September 2017.  We needed 12 of this combination: Conformation (3), Herding (3) and high level Performance (3) plus 3 more of any of those or a combination.  We have raised 6 champions and 4 grand champions with others sired by our stud dogs that have gotten their championships. Our dogs have 6 herding titles (so far) and quite a few high level performance titles.  We know there will be many more in the future especially since we use the personality evaluations to be sure the performance pups get in to performance homes.  The difference between ASA and MASCA is that in ASA the dog must be over 12 months to get an adult championship, under 12 months they can earn a puppy championship.

An ARBA Championship takes 10 Winner's Dog/Bitch to get a championship.  We don't have enough of their shows in our area so we have never gotten this title on our dogs (a few have 9 but not 10)

IMASC:  That club takes the copy of your MASCA Championship and makes the dog an IMASC champion. They have no show program at this time, they work on the merits of other clubs.

As you can see from this list, ASA and MASCA championships have the most integrity of all the Mini Aussie clubs and we are proud to get as many of our dogs championships or grands as possible.  So when you see Champion on a dog you are considering purchasing from or breeding to be sure to find out what venue it got the championship from.
What is the difference between a Mini Aussie and an AKC Mini American?
AKC accepted Miniature Australian Shepherds in to their club but they had to rename the breed to Mini American.

Can you compete in AKC performance events with your MASCA registered Mini Aussie?
Yes!  If you are interested in competing in AKC performance events such as agility, rally, obedience, etc., you may do so with your registered Mini Aussie. To remain Mini Aussie you must fill out the Canine Partner form as an All-American bred dog. Otherwise you will be taken in to AKC as a Mini American.  Feel free to contact us for more information. 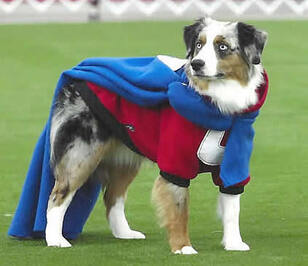