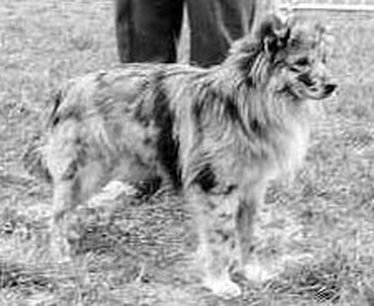 Berger des Pyrénées (Pyrenean Shepherd) - the Basque herding breed
Breed History
Certain early ancestors of today’s Australian Shepherd may have migrated with Basque shepherds from continental Europe directly to North America. The blue merle color phase is still present in the modern Berger des Pyréneés. The breed may have acquired its name via Australia where the Basques are known to have accumulated larger flocks of sheep. By whatever path, Aussies had arrived in the United States by the late 19th century where the dogs’ qualities became recognized by local ranchers, who used the dogs to work cattle, sheep and other livestock.

Genetic Origin
Working ability was the paramount consideration during the early years, rather than any particular conformation but a distinct breed of moderate coat and size, superb herding instinct and often of unusual blue merle coloring emerged, still bearing a marked resemblance to Pyrenean ancestors, although undoubtedly influenced by various British and American working breeds, such as the Scotch Collie, Border Collie and English Shepherd. The "little blue dogs" were soon highly esteemed on ranches and farms throughout western America.

Jay Sisler popularized the Aussie with the American public through his trick dog acts performed at rodeos throughout the United States during the 1950’s and 1960’s. His dogs also appeared in movies and several figure prominently in the pedigrees of the modern Australian Shepherd.

The Aussie is a relative newcomer to purebred registries, only being formally recorded since 1957. The first organization to register the Australian Shepherd was the National Stock Dog Registry (AKA International English Shepherd Registry). The Australian Shepherd Club of America (ASCA) established recording services in 1971, taking over a majority of Aussie registrations. ASCA adopted a unified breed standard in 1977.

The mini Aussie soon attracted the attention of experienced Australian Shepherd breeders and eager newcomers. Lines were researched and educated breeding to full-size Aussies was and is strongly encouraged to diversify the gene pool and improve conformation and type of the mini Aussies. Herding instinct, intelligence and drive were preserved and many mini Aussies continue to work a variety of livestock today.

After the RBKC folded in the early 1990’s, the mini Aussie gained acceptance with the American Rare Breed Association (ARBA). Unfortunately, ARBA regulations stipulated that in order for a breed to qualify for Group and Best in Show competition, it could not have a name associated with an AKC breed. So in 1993, when the Australian Shepherd was granted full show privileges in the AKC’s Herding Group, one group of mini Aussie enthusiasts opted to change the mini Aussie’s name, a move which caused great confusion in the dog world and for the general public and eventually led to the development of a separate and distinct breed from the Australian Shepherd called the North American Shepherd.

Dissatisfied with the limited show schedule offered by any one club, enthusiasts attempted to secure wider recognition. However, it soon became apparent that acceptance could not be gained under the new name because it implied a new breed. In actuality, the mini Aussie remained a size variety of the Australian Shepherd, with a continuous gene pool, and not a separate breed. Those concerned with maintaining Australian Shepherd heritage, instinct, temperament and type, and interested in pursuing further recognition formed a Miniature Australian Shepherd parent club in order to attain these goals.

General Appearance
The Australian Shepherd of the miniature variety is a well-balanced dog of medium size and bone. He is attentive and animated, showing strength and stamina combined with unusual agility. Slightly longer than tall, he has a coat of moderate length and coarseness with coloring that offers variety and individuality in each specimen. An identifying characteristic is his natural or docked bobtail. In each sex, masculinity or femininity is well-defined. Bone is moderate and clean with coarseness, heaviness or lightness being undesirable. Overall type, balance of conformation and movement are valued more highly than individual structural perfections because it is balance which enables him to fulfill his purpose.

Character
The Australian Shepherd of the miniature variety is intelligent, primarily a working dog of strong herding and guardian instincts, he is an exceptional companion. He is versatile and easily trained, performing his assigned tasks with great style and enthusiasm. He is reserved with strangers but does not exhibit shyness. Although an aggressive, authoritative worker, viciousness toward people or animals is intolerable. Fault: Undue shyness. Disqualification: Viciousness.

Head
Clean-cut, strong, dry and in proportion to the body. The top skull is flat to slightly rounded, its length and width each equal to the length of the muzzle, which is in balance and proportioned to the rest of the head. The muzzle tapers slightly to a rounded tip. The stop is moderate but well-defined.

Teeth: A full complement of strong, white teeth meet in a scissors bite. An even bite is a fault. Teeth broken or missing by accident are not penalized. Disqualifications: Undershot bites; overshot bites exceeding one-eighth inch.

Eyes: Very expressive, showing attentiveness and intelligence. Clear, almond-shaped, and of moderate size, set a little obliquely, neither prominent nor sunken, with pupils dark, well-defined and perfectly positioned. Color is brown, blue, amber or any variation or combination thereof including flecks and marbling, with no preference. Disqualifications: Offset pupil. 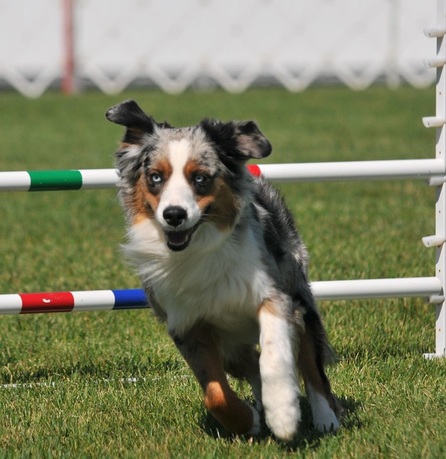 Blue Merle with two blue eyes
Ears: Set on high at the side of the head, triangular and slightly rounded at the tip, of moderate size with length measured by bringing the tip of the ear around to the inside corner of the eye. The ears, at full attention, break slightly forward and over from one-quarter (¼) to one-half (½) above the base. Prick and hound-type ears are severe faults.

Neck and Body
The neck is firm, clean and in proportion to the body. It is of medium length and slightly arched at the crest, settling well into the shoulders. The body is firm and muscular. The topline appears level at a natural four-square stance. The chest is deep and strong with ribs well-sprung. The loin is strong and broad when viewed from the top. The bottom line carries well back with a moderate tuck-up. The croup is moderately sloping, the ideal being thirty (30) degrees from the horizontal. Tail is straight, not to exceed three (3) inches, natural bobbed or docked.

Forequarters
The shoulder blades (scapulae) are long and flat, close set at the withers, approximately two fingers width at a natural stance, and are well laid back at an angle approximating forty-five (45) degrees to the ground. The upper arm (humerus) is attached at an approximate right angle to the shoulder line with forelegs dropping straight, perpendicular to the ground. The elbow joint is equidistant from the ground to the withers. The legs are straight and powerful. Pasterns are short, thick and strong, but still flexible, showing a slight angle when viewed from the side. Feet are oval shaped, compact, with close-knit, well-arched toes. Pads are thick and resilient; nails short and strong. Dewclaws may be removed.

Hindquarters
Strong and muscular. Width of hindquarters approximately equal to the width of the forequarters at the shoulders. The angulation of the pelvis and the upper thigh (femur) corresponds to the angulation of the shoulder blade and upper arm forming an approximate right angle. Stifles are clearly defined, hock joints moderately bent. The metatarsi are short, perpendicular to the ground and parallel to each other when viewed from the rear. Feet are oval shaped, compact, with close-knit, well-arched toes. Pads are thick and resilient; nails short and strong. Rear dewclaws are removed.

Coat
Of medium texture, straight to slightly wavy, weather resistant, of moderate length with an undercoat. The quantity of undercoat varies with climate. Hair is short and smooth on the head, outside of ears, front of forelegs and below the hocks. Backs of forelegs are moderately feathered; breeches are moderately full. There is a moderate mane and frill, more pronounced in dogs than bitches. Non-typical coats are severe faults.

Color
All colors are strong, clear and rich. The recognized colors are blue merle, red (liver) merle, solid black and solid red (liver) and with or without white markings and/or tan (copper) points with no preference. The blue merle and black have black pigmentation on nose, lips and eye-rims; the red (liver) merle and red (liver) have liver pigmentation on nose, lips and eye-rims. Butterfly nose should not be faulted under one year of age. On all colors, the areas surrounding the ears and eyes are dominated by color other than white. The hairline of a white collar does not exceed the point of the withers. Disqualifications: Other than recognized colors, white body splashes, Dudley nose.

Lisa McDonald maintains the color portion of the website for ASHGI.  It is a wonderful resource for learning about coloration in Aussies.  Check it out! http://color.ashgi.org/color/index.html

Gait
Smooth, free and easy; exhibiting agility of movement with a well-balanced, ground-covering stride. Fore and hind legs move straight and parallel with the center line of the body; as speed increases, the feet, both front and rear, converge toward the center line of gravity of the dog, while the topline remains firm and level. Joints to not bend or twist when in motion.

Size
Preferred height at the withers for males is fourteen (14) to eighteen (18) inches; that for females is fourteen (14) up to but not including eighteen (18) inches. Dogs or bitches above these measurements should be faulted to the degree of variance, however, quality is not to be sacrificed in favor of size. Disqualification: Below 14″ at the withers.

Note: The Australian Shepherd of the miniature variety should be judged as if it were an Australian Shepherd in all respects other than size. The mini Aussie’s conformation, moderate coat, efficient yet driving movement and stable temperament should all imply a herding dog capable of working long hours in a variety of conditions. Shown in near to natural state. Hair may be trimmed away from and around the pads. Whiskers may be trimmed or untrimmed (never removed on a dog to work stock). Pasterns may be trimmed between carpal pad and heel. Hair along hock and long hairs on docked or bobbed tails or sparse, stray or straggly hairs may also be trimmed to make a neater outline.

MINIATURE AMERICAN BREED STANDARD (click here)
What is the difference between a Mini Aussie and an AKC Mini American?
AKC accepted Miniature Australian Shepherds in to their club but they had to rename the breed to Mini American.

Can you compete in AKC performance events with your MASCA registered Mini Aussie?
Yes!  If you are interested in competing in AKC performance events such as agility, rally, obedience, etc., you may do so with your registered Mini Aussie. To remain Mini Aussie you must fill out the Canine Partner form as an All-American bred dog. Otherwise you will be taken in to AKC as a Mini American.  Feel free to contact us for more information.
ASDR, American Stock Dog Registry, MASCA, Miniature Australian Shepherd Club, MASCUSA, IMASC, IHDA, International Herding Dog Association, ASA, Australian Shepherd Association, AKC Miniature American Shepherd