Most, if not all, our males live in & are loved by co-own homes in Colorado and Wyoming! They go through STRICT evaluations before staying in our breeding program. They MUST do super on structure and personality evaluations as well as clear health testing.  We are looking for athletic dogs that have very balanced outgoing personalities and the structure to hold up for many years doing performance events as well as win in the show ring.  We do stand some of our males to approved females.  Write us for more information.
***ALL OUR DOGS ARE WICKETED for height - the heights listed are ACCURATE!***
UNION JACK - 2017 MASCA #1 Conformation Dog and MASCA Grand Champion
AKC Champion

***Union Jack #1 MASCA Mini Aussie 2017 and # 8 MASCA Mini Aussie 2016*** Union Jack is a GORGEOUS son of Jack Jr (74 Ranch Head N To Vegas) out of Chatter (CH 74 Ranch Talk N Up A Storm).  We loved him clear back when he looked so cute in the Chewy box and we love him even more now.  He was Reserve Winner's Dog his first show out at barely 6 months old.  Then at 8 months old he got Best of Winners, show 1, and WON the Specialty Show with a Best of Breed and Best of Winners.  He also took Best Male Head Type that day and helped 74 Ranch Mini Aussies win Brood Bitch and Breeder's Showcase!  This was all done at the WOWMASC show in Cheyenne, Wy October 22nd under Judges Sharon Elkins and Jean Pero. This boy has a SUPER personality - knows no strangers, loved agility from the day he 'sampled' it, loves to herd but has a great outgoing, confident personality.

A few months later Jack has gone on to get several Best in Shows at the ICE show in Colorado Dec 8-9.   Some of the judge's comments included: "Outstanding Breed Type", "Level Topline", "Solid excellent temperament", "excellent side gait", "beautiful young dog", "good smooth shoulder with nice depth", "strong rear", "nice reach and drive" and "impressive".  With just 1 weekend show he was in the Top 10 of ICE Puppies!

Union Jack got his GRAND CHAMPIONSHIP in ONE day March 11, 2017 in Seward NE with 3 Best of breeds. He went to MASCA Nationals 2017 and got his Intro Rally title and BEST OF BREED!  He got 2nd place in head type and movement also.  Union Jack has done all he can in the Mini Aussie conformation world so we took him AKC Miniature American Shepherd in April 2019!

Later in the year he passed his herding instinct test which made him eligible for a V-1 Award! Then he went on to achieve the #1 dog in MASCA 2017!!!

***Urban***  We found this cutie and couldn't resist adding him to our program.  He has a SUPER personality - very happy, outgoing, resilient and friendly. He is producing some beautiful babies with great personalities - we kept 2 females in our program so far and he has a son in the Wigglebutt program in Indiana.  He is an AKC Grand Champion finishing his Grand with several Best of Breeds in Sioux Falls SD the end of October 2019 - he has extra points to go on to the next level of championship too!  We appreciate MJ Rudsell for showing him almost to his grand before we ever purchased him.  Urban is CHIC Certified.

AKC Miniature American Shepherd
Wink - Black Tri Male and Peri - Blue Merle male - full brothers!
Wink is an awesome, sociable, exhuberant boy.  The blue merle pictured is his sire.  He got an obedience certificate at a very young age.  We look forward to seeing how this stout boy turns out when he grows up. AKC registered Miniature American Shepherd.
Magnum - Red Merle male
Magnum (now Jax) is a super nice pup that we decided to put in a co-own home in Casper WY.  I think he will be a great asset to our program later.  We don't have a lot of tri females but he will cross great on the ones we have.  He's super nice built structurally and has a great outgoing personality.  He's an AKC Registered Miniature American Shepherd!  Be sure to check back on the progress of this pup in the future!
We've been looking for a blk tri male for our program for the future for several years.... so we found this awesome little guy Jettson, sired by Chase (MASCA CH 74 Ranch Casanova at Quail Run) who's owned by Quail Ridge Minis.  Chase is a son of Jack out of EnV.  Jettson's mom is a beautiful red tri female, KickinAuss Red Hot Affaire.  This little boy has a super temperament and is a smarty pants!  We look forward to his future in the ring and as a sire.  He lives in California with Hilary Kerr.

Jack - MASCA GRAND CHAMPION and TOP 10: #5 in 2012
***Jack- #5 MASCA Mini Aussie 2012*** --  Foundation male for us!  Jack knew no strangers. He was an exuberant, fun, well built boy with super bone and a gorgeous head. Jack came from Mona Cooper at Ridgestar Aussies in Washington. He was about 3/4 standard and looks like the gorgeous standard Aussies you see out in the show rings! Jack's won several Best of Breed and Best of Opposite Puppy, many Best of Breeds and Best in Shows. He was MASCA Top 10 (#5) dog in 2012, has won many Movement, Male Head Type, WowDog Award and High In Trials. He was a MASCA Grand Champion and an ICKC championship. He was 1 point from his ARBA championship before retiring from the show ring.

One of the judges told the handler we sent him with, Rachel Hyer, NOT to take Jack out of our breeding program no matter how big he is, she said, "He's a fabulous specimen".

Jack has gone on to produce some awesome dogs in our program including 74 Ranch HeadN To Vegas (Jack JR), CH 74 Ranch Casanova of Quail Run who won the 2019 ASA Nationals as well as GR CH #2 MASCA Female 2017 74 Ranch Tell N It Like It Is (Candor) and her brother Crooz.  Now he's an awesome grandpa.... with GR CH Union Jack, CH Sway, Spring and Troy Oliver's CH Stella. He is the sire of the Best of Opposite winner of the ASA 2019 Nationals and #1 MASCA 2018 Sagoige's Rivers of Living Water who lives in Cheyenne WY and the Best of Opposite, Best of Winners and Winner's Dog at the 2019 ASA Pre-Show Quail Ridge All Revved Up his first show as well as Winner's Dog of the National Show.  We couldn't be happier with this awesome boy being a huge part of our program!!!
MASCA Registered Mini Aussie!  Jack is CHIC Certified.
SLING SHOT - MASCA GRAND CHAMPION and TOP 10: #5 in 2015 and #3 in 2017
SIRE OF #1 Miniature American Shepherd Preferred Agility 2019 & 2020, Loyal to Kyle

***Sling Shot # 5 MASCA Mini Aussie 2015 and # 3 in 2017*** Grand Champion Sling Shot is a beautiful son of our little Champion EnV, sired by an awesome MASCA Champion, Lookout I'm Naughty All Night! He has moved to Iowa with Jeff and Jessica Peak of Crystal Hill Mini Aussies. He loves people and is very playful and smart! Judges remarks: well balanced, well muscled, proper breed type, lots of coat in good condition, nice, correct topline, covers the ground effortlessly and presents self well in the ring.  He has his MASCA championship and several Q's in performance events as well as his CGC. He got his Grand Championship being handled by Rachel Hyer of Sagonige Kennels in SD and was announced #5 MASCA Conformation Dog 2015 then #3 in 2017. He is red-factored and producing blue-eye tris.  LIke our other males he loves everyone. Sure am glad we use the personality evaluations and structure evaluations before deciding who should stay in our program.  Sling is a happy, fun-loving boy and a joy to be around!
Sling Shot along with Lucy have produced the #1 Miniature American Shepherd (preferred) Agility Dog 2019 and 2020
PACH6 Loyal To Kyle RN MXP17 MXPS2 MJP17 MJPG2 PAX6 OFP
Sling Shots personality test at 8 weeks old
MASCA and ASA Miniature Aussie
JACK JR - SIRE OF MASCA #1 2017 GR CH Union Jack
Jack Jr is a beautiful son of GR CH Top 10 Ridgestar Bareback Jack at 74 Ranch SCT-I, mHIC, M-I, RO-I, RO-N, V-2 out of Multi CH Sagonige's Turn N Heads at 74 Ranch mHIC, CGC, SCT-I, CD-M, RO-N, A-I, NTD, V-2  .  I loved this boy as a pup (and wanted a black tri Jack pup), he was very laid back and friendly, well-mannered so I wanted to keep him in my program.  Jack Jr lives with Mark and Olga in Boulder, Colorado.

Jack Jr was only intact for a short time but wow, was it worth it, we have kept several of his babies back for our program including Union Jack (now a MASCA Grand Champion and #1 dog in MASCA Top Ten 2017) and Sway (a Champion at 7 months) as well as a sister to Union Jack in a show home, 74 Ranch MAJC Spring Snowstorm #6 in 2017!

Jack's personality test at 8 weeks old.
ROY - 2016 MASCA #7 Conformation Dog, MASCA Champion
​RETIRED APRIL 2022
***Roy- #7 MASCA Mini Aussie 2016***  We purchased Roy from Sagonige Mini Aussies in South Dakota. He and his siblings personality evaluated fantastic and we fell so in love with the litter- that we got 2 of them. They are sired by our Grand Champion Top 10 Sling Shot and out of Gr Ch Top 10 (#1 two years in a row) Sagonige's Gigage Ada (full sister of our Lucy). He is an absolutely gorgeous black tri boy with 2 blue eyes. He loves everyone, including children and works/plays around the ranch full time (except when he gets cleaned up for a show).

Roy got WD in his first WOWMASC show then went on to a show in Greeley CO and got Best of Breed, Best in Group Bred By Exhibitor and more.  He got his MASCA Championship at a year old in his 2nd show too.  He received some wonderful comments from judges: "very nice young dog, handsome, very well presented, lovely ring presence, strong and compact, strong masculine head, well muscled front end with nice lay back, good bone, good shoulder, proper bend of stifle, moves well with good reach and drive, fluid movement, young and excited!"

Roy got Best of Opposite in the October WOWMASC Show under Judge Jean Pero!

Roy is AKC registered.
HOWDY - BOB/Best Aussie Puppy
Howdy is a super sweet, little boy who loves to snuggle. He is VERY easy to live with.  He is very social and confident. Amazingly he never gets in trouble either!  He has a beautiful head, nice structure, great personality, amazing copper and gentle brown eyes.  He was purchased from Fullerton's Toy Aussies in Nebraska.  His parents are toys (13 3/4") but he is a small mini at 15 1/2". Howdy's first show weekend was a run-away - he got ALL 3 Best of Breeds with a nice number of pups.  He got Best Aussie Puppy at the ASA Specialty.  He got Group 2 Herding Group Puppy.   We look forward to crossing him on our girls in the future! Howdy now lives in Worland WY! 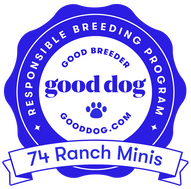