***MASCA Hall of Fame Breeder***
Our Females are evaluated STRICTLY at 8 weeks old then again at 2 years old to be sure they should be in our breeding program. We are looking for great structure that can win in the show ring, personality/temperament to do performance events and hold up for many years in athletic events as well as clear health testing.  We only keep balanced, outgoing personalities in our program for the best chances of that in their puppies. Most of our pet puppies are show/breed quality but we can't and won't keep them all.  We will only keep the highest quality pups
back to breed better and better Mini Americans for our clients to enjoy in the future.
Be sure to consider 74 Ranch for your next 'Best Friend'!!! 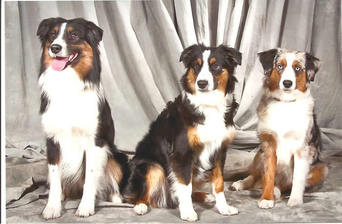 Echo and Cooper's sire, URO1, CH Wigglebutt Light Up My Life RL1 Award of Excellence, RL2, mHIC, DD-A, CD-M, CD-IM, SCT-N
***Echo- #10 MASCA CONFORMATION 2011, #8 in 2012; #2 Top MASCA HERDING Dog 2016 and 2017; Most Versatile Aussie 2nd place 2016 and 2017; Extreme Aussie Games #3 2016; #4 2017*** Echo is sired by Wigglebutt Light Up My Life (Lucas) from Wigglebutt Aussies of Indiana and out of our Hall of Fame X Dam  IABCA CH Heartland's Whispering Brooke. We loved the litter out of Brooke and Lucas so we decided to keep 2 of them in our breeding program. Echo lives with us at 74 Ranch and her full brother Cooper lives in Colorado- finally we produced some to keep! Echo truly is the full package - she structure tested excellent and is an awesome dog with SUPER MOVEMENT, athletic abilities, great personality and gorgeous looks! She has a super shoulder angle and front end, great strong legs and hocks, nice head, well balanced! She truly is the joy of my life, we work super well together and she will do anything to please me!  She has at least 23 titles.

She loves agility and frisbee and is a very focused girl! We have kept several of her babies in our program/partner homes to see how they grow up. At her first NADAC agility trial she got 3 qualifying scores out of 4 runs! She got her Open NADAC agility in 3 days/6 runs!

Oct 2016: Echo got High In Trial Level 2 Herding on Ducks under Judge Anita Ramsey!  That was fun!  She also was a major part of 74 Ranch winning Breeder's Showcase, Generations and Brace at the year-end award.  She also was 2nd in the WOWMASC Top Performance dog of the year.  She went on to be the #2 MASCA Herding Dog in 2016!!!

Nationals 2017: Echo got 5 High In Trials and 2nd pace MVA (Most Versatile Aussie) and got 4th in EAG (Extreme Aussie Games). She got HIT (High in Trial) in Acrobatics, Agility-Jumpers, Agility-Tunnelers, Farm & Ranch and Rally-Obedience.  She also won Brace with her granddaughter, Candor.

In mid September 2017 Echo finished her level 3 sheep herding title and level 1 Farm and Ranch title.  She got 1 leg of her level 3 Duck title, but missed the A course by 1 point... This did qualify her, however, for the V-4+ Versatility Award (it's the highest you can get in MASCA and she's the first/only one to get it)!

Echo was a great producer for us: Savvy, champion also got her CGC, novice disc dog title and advanced rally title; Chatter - champion and several herding titles; Sway - champion and novice rally title along with some gorgeous pups that we have placed in pet and/or co-own/partner homes to watch in the future. Her grandbabies are proving to be as good or better than her babies!!!

Echo got her MASCA Hall of Fame Dam January 2020. We lost her in Sept 2018, she will be forever missed by us here at 74 Ranch!
BUCKLES- AKC Champion
***Buckles***Sired by ASA #1 CH and AKC CH Quail Ridge All Revved Up (Charlie - sired by our Jack out of an Indy X Echo daughter) and out of our own IABCA CH 74 Ranch Cute As A Bug.  Buckles got her championship in August 2021 shown by Kat Wallis of Black Diamond Show Dogs in Nunn CO.
Buckles has a sweet personality, she was the easiest puppy we ever raised.  She is absolutely adorable.  She's pretty small, weighing in at 6 lb 6 oz at 8 weeks old.   At 9 months she's 14 1/2", 20#. She got her CGC and just earned her FastCat title in Sept 2021.  She lives here with us at the ranch.

AKC Miniature American Shepherd
RUMOR- AKC Grand Champion
Rumor is a super nice pup we kept in our program for the future. She's the epitome of our breeding program - Union Jack X Candor!  Her first show she got RWB and WB at just barely 6 months old.  She has been very successful in her show career so far and almost has her championship. She's turning out to be a beautiful girl with an exuberant personality!  Rumor got her championship and fastcat titles the same day 8/22/22.  AKC registered.
EMBER
Ember an adorable, sweet female sired by Union Jack out of Candor. She's a full sister of Rumor.  We are excited to see how she turns out.  We hope to have her in the ring in the near future.  AKC registered
These AKC Miniature American Shepherd girls live in co-own homes!
MALIBU - AKC Grand Champion / ASA Top 10, #2 2019

***Malibu*** We fell in love with this girl at the ASA Nationals spring 2019 and begged Theresa to let us lease or co-own her.  Instead we are now co-owners!!!    She has her AKC Grand Championship.  Before starting her AKC showing she did 2 ASA shows and ended up #1 Female 2019.  The first one, ASA Nationals, she picked up 14 pts towards her championship.  The second one, an ASA specialty/IABCA show she got Best of Winners, Best of Breed, Best Bred By, Best Aussie (all sizes), Best Movement and Best Female Head Type and finished her ASA Championship.  The next day she got Best of Opposite, what a great start to her show career.
Malibu was registered with AKC soon thereafter and has her AKC Grand Championship.
​
AKC  Miniature American Shepherd
River is a great outcross for our boys.  We don't have much out of Roy and we leased Patty so she's new lines to our program. We hope to have 1 or 2 litters out of her in the future.
FOLLOW US ON
ASDR, American Stock Dog Registry, MASCA, Miniature Australian Shepherd Club, MASCUSA, IMASC, IHDA, International Herding Dog Association, ASA, Australian Shepherd Association, Nebraska Mini Aussies, Colorado Mini Aussies, Nebraska Mini Americans